Basilone’s celebrity grows as he travels across the country on the war bonds tour. On Pavuvu, Sledge, assigned to the 5th Marines, 1st Marine Division, is briefly reunited with Phillips and Leckie rejoins his company. Sledge then gets his first taste of combat as he, Leckie, and the rest of the 1st Marine Division meet fierce Japanese resistance while landing on the intricately and heavily defended coral island of Peleliu. 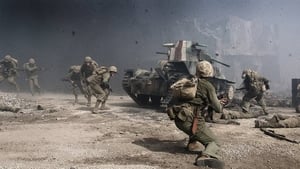